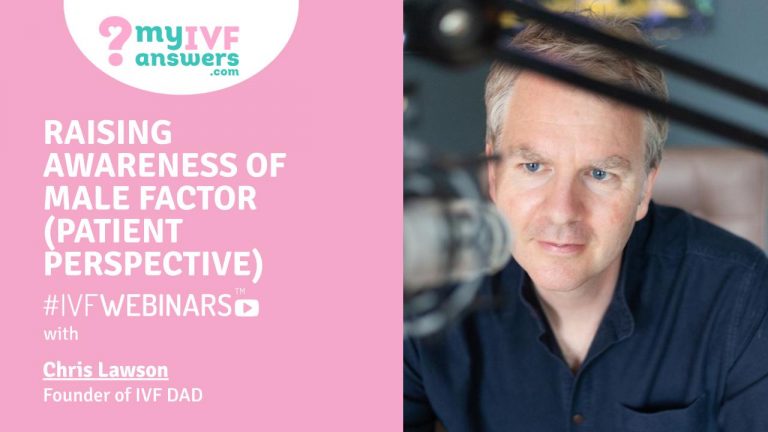 The experience of infertility treatment: the male perspective

In this session, Chris Lawson, Founder of IVF DAD, a podcast created to support the partners going through the fertility treatment process. Chris has been talking about the male fertility factor and what is important to know from his perspective as he was going through the IVF process with his wife.

The experience of infertility treatment: the male perspective - Questions and Answers

What would you suggest focusing on most before starting IVF? What helped you to deal with failed attempts?

I think there were two answers about what to focus on most before starting IVF. The first one is almost a bit like relationship management in a way, it’s important to sit down as a couple and work out what your red lines are, work out on what you can cope with and what you don’t want to cope with, and how are you going to communicate and deal with this as a couple. It sounds a little like a management training course but trusts me it’s important because when you’re in the midst of it, and you’re there in relationship court by the kitchen table, you want to make sure that you’ve got that sorted so that you don’t start taking this out on each other.

The second thing is that there’s a huge amount of noise on the Internet about important things, and there’s a lot of things that are important in terms of increasing your fertility. The important thing to do is get some advice because everyone is different and some things are more important than others. For instance, if I’d gone completely blind into it, I certainly knew that as a man, you’re told to wear sort of loose-fitting briefs and not take hot baths and maybe not cycle 40 miles a day, not that I am a smoker but what I didn’t understand was the impact of smoking on fertility.  Pretty much throughout the whole process, every single time we went to the doctor asking if there is anything that we should be doing, and time and time again, we heard live a healthy lifestyle.  You shouldn’t smoke because it has such a dramatic impact on your own fertility. My advice would be, get a health check and work out the most important factors for you.

There’s a bit where we were trying to motivate each other. I would pick Trish up sometimes, she would pick me up what we tried to do, we almost had an on the season, and an off-season with IVF fertility treatment was beyond the season, it’s a bit like training for the importance of a sporting occasion where we’d be watching what we eat, we’d be watching what we’d drink, we’d be getting in the zone, we’d be motivated, we’d be thinking about that end goal, we’d be positive about it, and then you’re faced with crushing news that it hasn’t worked. At that point, we did tend to have a bit of a blowout, we’ll get back on the treadmill, but in the meantime, let’s just go out and have a bit of fun as a couple for us, I involved a bit of drink, but it was important to go out on a date night go out and do something that you enjoyed, try and get away and that’s another realization about fertility treatment, getting away is quite difficult because you realize your diary is not your own so at that point before while your body recovers and while your mind recovers just try and get a weekend break away or just to change the scenery because when you’re back in it again, it’s difficult, so that helps.

I run, that was my outlet, I found it good because it was quite solitary as well. I didn’t really like showing my emotions in front of Trish, but I could get myself out in the middle of nowhere and perhaps let go a bit, so that worked very well for me.  I think from Trish’s perspective, she looked at alternative medicine as well, she took some great solace in terms of reflexology and acupuncture, I was a little more sceptical, but again it’s a team game, things that were important to her, I just supported, and ultimately you have to carry on talking to each other and listen to the other person when we go:  I’m just not ready to try again at the moment, that doesn’t mean that it’s panic stations and to forget about it just means you need to get your energy back.

Have you tried to take some supplements as well? There are so many out there, and that can be so confusing.

It can be so confusing and very expensive. You can get about 10 different types of vitamin C ranging from about 50 pounds to about 10 pounds, so you need to take a step back with that, you need to focus on the supplements that are going to make the biggest difference. I would get medical advice on that, there was a list for me such as omega fish oil, vitamin D, I can’t remember some others, but I can certainly reply privately and find the details if that’s interesting from a male perspective. One of the things the doctor said to me was the brands make no difference, it’s just about taking the right supplements, so be careful of marketing.

From your perspective, what is the best way to start talking about fertility with men? Any advice my husband finds it really difficult.

I think for me, you have to understand that it can be difficult, and you have to understand some of the things that might be going on. Sometimes it can be as simple as just not being able to find the right words and understand, that they may well be feeling it, but they just can’t find ways to express it and therefore don’t take it as a rejection, I think that’s important. Sometimes you’ve got to find different ways, different circumstances, it may be on a walk, it might be during a run, it might be on a date night, it might just be something.

Being confronted with a conversation about fertility all the time if you find it difficult might even make you retreat a bit more into your shell. Quite often, it was the times when we’d agreed not to talk about it, and we’d just be out, and after I’d had a couple of drinks that I’d be able to express how I felt about it and sometimes that worked for Trish.  Sometimes, men find it easier not talking to the very person they love most in their lives, so sometimes, it’s making sure they’ve got another outlet. Counselling can be incredible support, and I think that’s partly why podcasts can be important as well. It can be another source to talk to someone, even if it’s in their own mind. Be creative, I think is probably the simplest way of saying that. 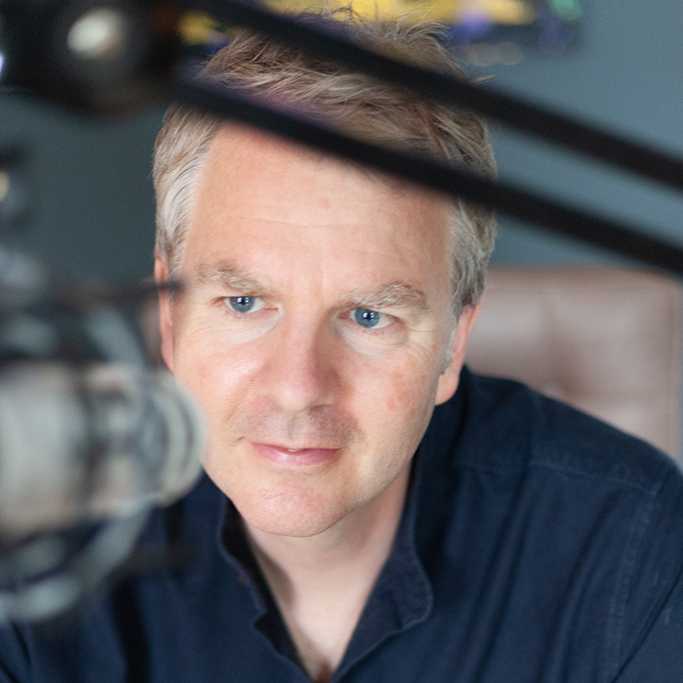 My name is Chris Lawson and I left it late to start IVF (44) and so did my wife Patricia (39).  After 5 years of trying for a baby, countless rounds of IVF, treatment, 18 embryos AND some life-changing decisions, our daughter Rosie was born in January 2020.  Along the way, there was heartache, pain, wacky diets, excitement, hope, determination, loss of faith and a lot of needles. While my wife was undergoing IVF treatment I was shocked at the lack of support there is for the partner (usually male). I felt alone, I felt somewhat guilty and at times I felt useless. As a result of my experience, I was inspired to create a podcast www.ivfdad.com,  a support system for the partners going through the fertility treatment process. I know it can be a lonely place but remember to stay healthy, stay positive, and it only takes one. That's why I set up www.ivfdad.com
Event Moderator