Let’s talk about IVF add-ons: IMSI, PICSI, MACS, AH, EmbryoScope, EmbryoGlue. When, why, and how? 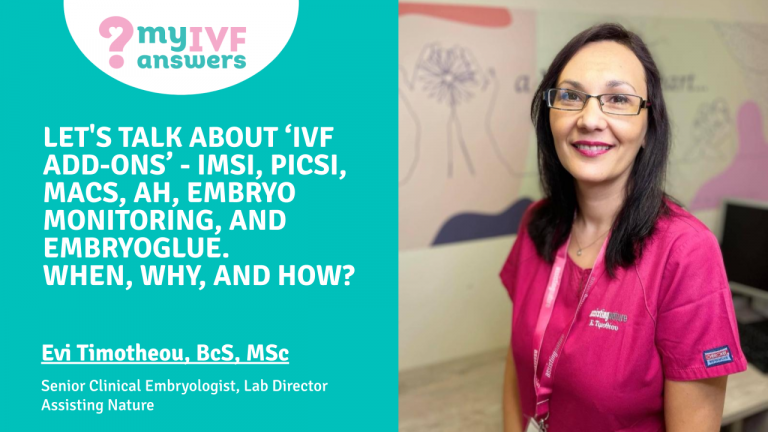 Let’s talk about IVF add-ons: IMSI, PICSI, MACS, AH, EmbryoScope, EmbryoGlue. When, why, and how?

What do you need to know about IVF 'add-ons'?

In this webinar, Evi Timotheou, BcS, MSc, Senior Clinical Embryologist, Lab Director at Assisting Nature, explained what IVF add-ons are and when they should be indicated. Evi started by introducing several techniques used in the lab that help to increase the chances of successful IVF treatment. The most common techniques used are IMSI, PICSI, MACS, Assisted Hatching, Embryo monitoring and EmbryoGlue.

It’s a method that allows the intracytoplasmatic sperm injection of morphologically selected sperm. The sperm is seen with high magnification (6000 to 6600), and it allows the embryologists to choose only the healthiest sperm with the best morphology. This method is used when spermatozoa have mitochondrial dysfunction or DNA damage. It helps to identify spermatozoa with a normal nucleus and nuclear content. IMSI can contribute to improving the success rates in patients diagnosed with oligo-asthenoteratozoospermia. According to studies, it has been shown that this particular method can lead to better fertilization rates, better embryo quality and, in consequence, better pregnancy rates. In addition, IMSI is a great technique for couples with unexplained infertility or with repeated implantation failures.

PICSI is another technique that helps to select sperm. It offers new assessment criteria, as it is based on the ability of the sperm to bind the hyaluronic acid. Hyaluronic acid is used as a sperm selector. A dish which contains special culture media with hyaluronic acid is used, and when a sperm sample is added, only spermatozoa with the best quality bind to the acid. The principle of this method is based on the fact that hyaluronic acid naturally occurs in the substance that surrounds the oocyte and plays a critical role in spermicide fusion. This method is indicated for patients with repeated implantation failures, recurrent miscarriages and if a male has a high DNA fragmentation.

MACS is based on the immune-magnetic separation and selection of good-quality spermatozoa, it is capable of fertilizing the oocytes and removing apoptotic spermatozoa. It’s based on the use of magnetic nanoparticles which have surface-specific antibodies to recognize and adhere to only apoptotic spermatozoa. The sample then passes through a magnetic filter that binds apoptotic sperm while allowing it to pass the normal one. This method is usually used in patients who have poor embryo quality, and have gone through several miscarriages as well as when a man is diagnosed high rate of DNA fragmentation.

Embryo monitoring is a continuous tracking of the individual development of embryos. Thanks to a video recording, it is possible to determine which embryo develops normally and is best suited for transfer, which has the greatest chance of developing into a healthy baby. Another advantage of this imaging system is that the embryologists can view the embryos 24 hours a day without the need to remove them from the stable conditions of the incubator.

Another useful tool is the EmbryoGlue, which is not glue but acts like glue by increasing the chance of implantation of the embryo in the womb. It consists of a high concentration of hyaluronan and recombinant human albumin, both of which promote implantation. EmbryoGlue mimics the natural environment in the womb. All the nutrients and the energy substrates in EmbryoGlue are adapted to the embryo’s needs at the time of implantation. Thanks to those methods, it’s possible to improve the fertilization rates, and by mixing them all, it’s possible to improve the embryo quality, increase the blastulation rate, implantation rate and finally increase the pregnancy rate, the pure purpose of all those techniques other than just increasing the rates is to help the couple to have a healthy baby.

What do you need to know about IVF 'add-ons'? - Questions and Answers

Can you use EmbryoGlue at the same time as assisted hatching?

Yes, we can use it because when we do assisted hatching, we do it some hours before, not at the last time, and we can use it. It’s not a problem to use both at the same time.

I’ve just had a 5th transfer that didn’t work (it was FET). My clinic did not think highly of assisted hatching, but now I’m waiting for a review next week, so hoping we can suggest something else to try. We have 6 frozen untested blastocysts to try. I am 43, we froze embryos at 42.

I think it also depends on the age of the woman, but I think, after thawing the embryos, zona pellucida is hardening, so we think it’s better to have an assisted hatching and help the embryo to go out from the zona pellucida. I would also suggest doing the pre-implantation genetic diagnosis at this age.

Do you personally use all these add-ons in your lab? Have you indeed seen an increase in your delivery rates?

I tried them all, and I use them all for a while, but I think assisted hatching increases the delivery rates as well as embryo monitoring with time-lapse, which makes the embryos less stressed in a way. I must say that in time-lapse incubators, we culture all the embryos that are going to be genetically tested, so we can check the blastocysts when they are ready to be taken rather than taking them out every half an hour, this is the biggest advantage.

What does it mean to have 66% of dead sperm? What can be done in such a case?

I think you mean the DNA fragmentation result. They usually prescribe some vitamins, and then, the doctors suggest examining them again. However, I think we can find a healthy sperm if it’s not quite 100%. There’s always a chance to find healthy sperm.

I understand that embryo monitoring helps to choose the most suitable embryo. Besides that, does embryo monitoring directly increases the chances of implantation rate compared to embryos that managed to develop to day 5 in standard conditions due to the better condition for development in embryo monitoring? Especially, does the process of embryo development influence any potential genetic issues or do those genetic problems come directly from egg and sperm and the development process during the 5 cultivation days doesn’t play a role anymore?

The incubator helps because we don’t have to take the embryos outside, but there are a lot of conditions other than genetic problems that can affect the quality of an egg and sperm, especially when we do the ICSI, there must be an appropriate temperature, if it is lower or higher, we can cause some abnormalities to the embryo. Regarding embryo monitoring, normally we can select the best embryo without embryo monitoring. However, thanks to embryo monitoring, we can choose the best embryo for the first transfer even better because we can see the embryo throughout its whole development.

What are your thoughts on performing PGT-A testing on frozen embryos, to defrost them, test them, and then refreeze them? I used donor eggs but have had 7 embryos with no signs of implantation. My clinic doesn’t recommend testing, but I want to try everything I possibly can.

I don’t recommend doing this because it is a stress for the embryo too. First, you would need to thaw the embryo, test it and then freeze and thaw it again. We don’t know if such an embryo will react well when we thaw it for a transfer, so we don’t recommend it. It’s better to decide to test them before freezing them on day 5.

Can assisted hatching cause any damage to the embryo?

Yes, if an embryologist doesn’t know how to do that properly, it is possible to do some damage to the embryo. However, I think that all the embryologists that use this method are capable to do it with a good result.

Does it makes sense, and is it possible to combine embryo monitoring and PGT-A testing? We tried non-invasive PGT-A, but our first transfer with an okay embryo was not successful, and our remaining embryos have been graded as the lowest category. Our clinic recommends doing a potential next stimulation to do PGT-A

Non-invasive PGT-A is still experimental, so they may seem to be okay, but we’re not 100% sure that they are okay for real. I would suggest doing a PGT-A in the next stimulation to be sure and check them genetically.
Authors

Evi Timotheou, BSc, MSc is a Senior Clinical Embryologist, Lab Director at Assisting Nature, Thessaloniki, Greece. Evi Timotheou received her Bachelor of Science degree in Biology from the University of Bologna, Italy in 2004. Her thesis included research about the influence of different culture systems in human ovarian tissue preservation after cryopreservation. Evi began her embryology career in 2004 at University Hospital Sant’ Orsola Malpighi, Institute of Gynecology & Obstetrics, Human Reproduction Unit, Bologna, Italy, trained by Raffaella Fabbri in freezing/thawing ovarian tissue, ovarian tissue culture and electron microscopy techniques. She completed her internship in IVF techniques at Ravenna Hospital, Department of Obstetrics & Gynaecology, Italy in 2006. In 2007, she was recruited as an embryologist at Genesis IVF Center, Patras, Greece. She joined American Fertility Services Clinic in New York, USA in 2007 and specialized in assisted reproduction techniques including pre-implantation genetic diagnosis (PGD) and extended embryo culture. In 2009 Evi joined the Team of embryologists at “IVF Athens Center” in Athens, Greece. She obtained her MSc. in Reproductive Science from the University of Athens, Medical School. Her research included the use of metabolomics in in-vitro fertilization for embryo development and their relation with the genetic profile of women. Since 2013 Evi is ESHRE certified Clinical Embryologist. She joined Assisting Nature as a Senior Embryologist in 2015 and was promoted to Laboratory Director in January 2016. Evi is responsible for all functions of the clinical laboratory including in vitro fertilization, ICSI, assisted hatching, testicular and epididymal sperm preparation, preimplantation genetic diagnosis, oocytes and embryo cryopreservation. Finally, she is responsible for the quality assurance and quality control of the Embryology Laboratory. She has co-authored numerous research journal articles in her field and is an active member of The European Society of Human Reproduction and Embryology.
Event Moderator 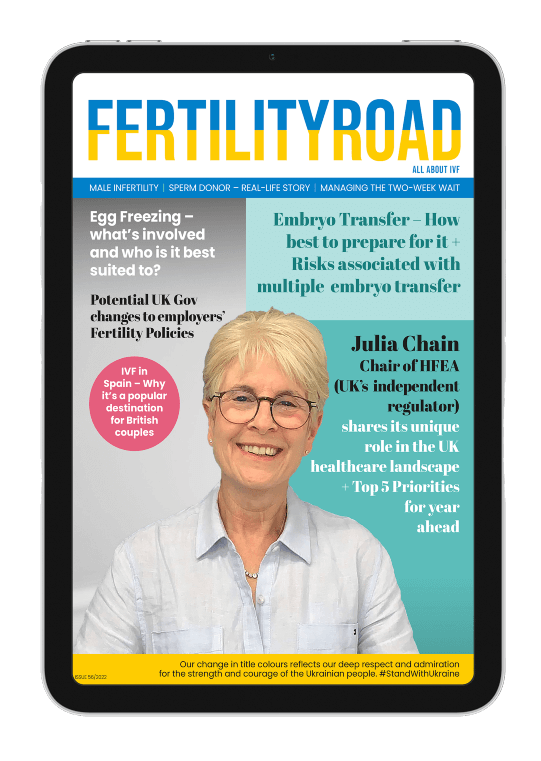