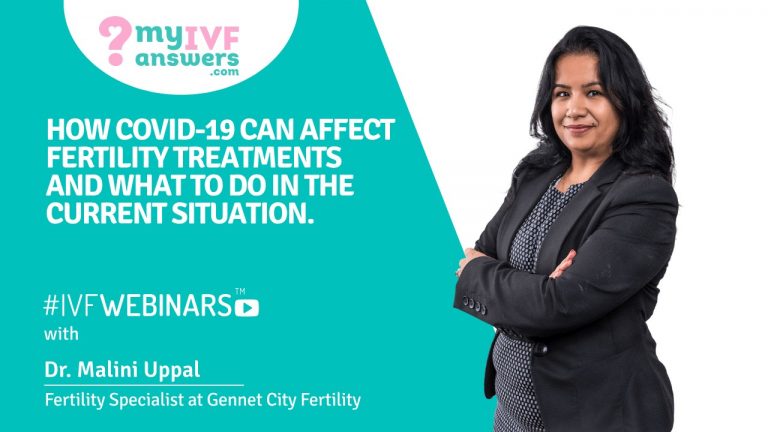 All you need to know about fertility treatment and COVID-19

How can Coronavirus affect patients’ IVF treatments? What can couples do in the next few months to improve their chances of IVF success once the fertility units open again? This topic was discussed by Dr. Malini Uppal, a Fertility Specialist at GENNET City Fertility, UK.

Assuming there will no be FET before 2021, what time frame should I be concerned about supplements before that (I know for retrieval, it’s generally 3+ months for egg quality, but I’m only doing FET now)? Which supplements for only FET?

A recommended time is three months before you start conceiving or start your frozen embryo transfer The recommendations are to take folic acid for sure, 400 micrograms, which is shown to reduce the neural tube defects in the baby, and vitamin D – as we all are living in these countries, we never get enough vitamin D. Also, fortified food, you can have nuts. Folic acid and vitamin D, are recommended, but you can take a pre-pregnancy or preconception multivitamin which contains everything. The only thing we do not recommend is taking vitamin A.

Do you think I might be able to do IVF in the summer, or will the recommendation be not to have IVF before there is a vaccine?

Once we resume with the treatments, you should be fine to continue IVF. There is a recommendation at the moment not to start any IVF treatments, only once we resume back to normal. Everything will need to be taken into consideration. We will be looking at what is happening. If there will be a vaccine. Keep in mind that the vaccine is not going to be for use yet, once it is developed, it will need to pass the trials etc. so possibly we’ll need to wait for vaccine till the next year.

Egg donors are usually young adults, and even if they get infected by coronavirus or develop any symptoms of COVID-19, they are likely to recover very quickly and in 100%. It is like any infection, once you get infected, you develop an antibody against it, and that means you are then safe from this virus. And does this virus have any effect on the eggs or anything there? There is no evidence on this, it is like any other flu virus, if you have the chickenpox, and you then are immunized by it, for the rest of your life. So you are a healthy individual, even if you did suffer from it. So once you had coronavirus or egg donor at any point did contract it, and has recovered, then it is a healthy individual. As long as the patient is not currently infected, there will be no need to do anything further to test the egg donor or the surrogate.

It’s my first pregnancy, but my age is 48 years old, the doctor said to do a second ultrasound for 8 – 9 weeks at 6-weeks.

Ok, I see. Because you are in advanced maternal age, then it is recommended that you have another ultrasound. You should give it at least three weeks, if you’ve had one at six weeks, give it three weeks because we have to understand the risk over the benefits of this situation. The more you’re going out, the more you are putting yourself at risk of getting infected. As they have now informed, pregnant women are a vulnerable group. Maybe a nine to ten weeks scan will be better. That should be fine.

Is it necessary to take this second ultrasound at 8-9 weeks, then maybe next will be 12 weeks?

It is not necessary to have the 8-9 weeks scan in normal circumstances. When everything is normal, then we do recommend having six weeks -eight weeks and a ten weeks scan, and then the twelve weeks go back to your antenatal care. It’s just to check the progress of the pregnancy and to see how things are going. And because this is after fertility treatment,  therefore we do the additional scan in between around eight weeks, but it is not necessary. It is mandatory to do a 12-week scan.

If I would do IVF in a few months when the coronavirus is still around, how big is the risk that I will get it during egg collection/fertilisation? What can I do to minimize the risk?

Hoping our cases will calm down, and if the things do resume back to normal but there is still coronavirus around, or there is still a risk. The egg collection does not put you on a high risk. It’s done in labs where it is sterile, and we are protected. We wear gowns, and protective equipment, however, if the virus is around, and is as rampant as it is right now, the travelling, and coming to the clinic for your scans, and coming for your treatment, that’s where the risk is. If you do get the virus at that time, and if you are showing symptoms, or if you are ill, then there is a possibility that your cycle will have to be abandoned, and you will not go ahead and do the egg collection because your life will be more important to us. We cannot put you under the sedation to do egg collection if you are suffering from a virus, which again exposes the staff, exposes the clinic, other patients and your own life.
We are going to develop herd immunity, immunity in all the population, and that is going to save us from this pandemic.

Can we try naturally? Does ‘avoid trying to get pregnant at this time’ refer just to fertility treatments or also to trying naturally?

At the moment, the recommendation is to try and avoid getting pregnant for anyone because as I said if you are pregnant, you become vulnerable. There is no evidence that a pregnant woman is more likely to get the infection as compared to a non-pregnant., However, the complications, the symptoms can be more severe later on in pregnancy, in the third trimester of pregnancy. This has been seen with other viruses as well including the influenza virus. It also depends on what age group you are, if you are someone who’s in the early thirties or mid-thirties, you can try it this time because you don’t want to take that chance. We do not know a lot of things about this virus we don’t know how it is going to be. There are no cases about early pregnancy problems, however, we don’t know if it’s getting transmitted, we’ve had two cases of a vertical transmission, which means it could be transmitted to the baby. We don’t know if it’s going to cause any problems for the pregnancy. If you are someone who can avoid it, it is better to wait, and hopefully, in 3-4 months, it will go back to some normality. If you are someone that is 42-44 and you’re trying, with every six months passing by, your chances will decrease, so perhaps you can take that risk. We also have to decrease the workload for NHS as they are facing this crisis, they need more and more people on the front line, and if we do get pregnant, that is another additional person going to NHS for treatment.

If I do NGS, do I have to come back to the clinic at a specific time (e.g. 4 -weeks later) or is it a bit flexible?

If you are doing NGS, that means testing of the embryos, and once the embryo biopsy is done, the embryo is then frozen. It takes up to 4 – 5 weeks for the results to come, and there is big flexibility after that. Once you’ve got the results, you will know if it is a normal or abnormal embryo, then we can decide when to do a frozen transfer. There’s no fixed time for this.

What would you recommend for patients with low ovarian reserve (AMH decreasing month by month) where time is more of an issue and 3-4 months does make a difference?

Patients with lower ovarian reserve, time is an issue here, so I would say, you should go ahead and try. Try to use this time, to be healthy, and try naturally, and do whatever you can in the given times because this is where the difficulty comes in.  The initial guidelines that came early in March said that we can treat patients like yourself, so with low ovarian reserve, however, with the changing scene, now we cannot do any treatments. I would recommend that if you’ve had your tubes tested, and if you are having open tubes, and if you ovulate regularly naturally, then do go ahead. Because there is no evidence at the moment to say, it has any complications in early pregnancy. 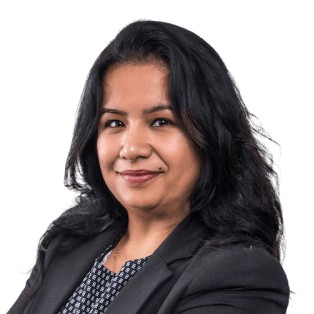 Dr. Malini Uppal has gained vast experience in the field of reproductive medicine during her training and work at several centres of excellence. She completed her postgraduate diploma in prenatal genetics and foetal medicine with distinction at the University College London. Her interest in PGD and PGS is well supported by her knowledge of prenatal genetics and foetal medicine. She is an associate member of the Royal College of Obstetricians and Gynaecologists and a member of the British Fertility Society. She is highly skilled in gynaecological ultrasound, three-dimensional scanning and early first trimester ultrasound. She is FMF accredited for the first trimester and NT scanning. She provides a highly individualised approach.
Event Moderator